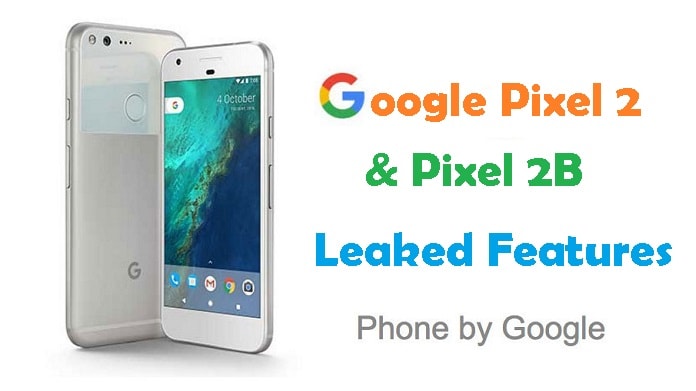 #UPDATE: The Updated post on Google Pixel 2 and 2 XL is live on our blog.

Google Pixel 2 & Pixel 2B comes with improved camera which was already high quality, improved CPU to output better performance. Google recently launched their first Pixel Android smartphone which got lots of positive reviews since it was fully packed with all the necessary premium apps and features you would wish to have in your smartphone you but it was quoted bit over priced by many.

So in order to make it available for mass audience Google is going to bring a high budget as well as low-budget variant that is Google Pixel 2B with almost all premium features and specifications. So talking about the new features, upcoming Google Pixel phone will be "waterproof" and dust resistant.

In Pixel 2 Android Phone, Google is focusing to improve camera quality and they are also testing much better Chipset from two different manufacturers like Snapdragon 83X and Intel or may be custom chipset which makes it's price higher. But the Pixel 2B, lower budget variant will come with lesser specifications and thus lower price.

Major focus on new Google Pixel is the camera which is aimed to improve low light photography. It might be compromised with less Mega Pixel but will be equated with other premium features.

As far as report suggest, price may increase by $50 as compared to previous Google Pixel comes at Rs. 57,000. This is due to extra features and better Chipset. So Google Pixel 2 price will be around $700.

Coming to the Google Pixel 2B, it is also under development and will be launched soon after the Pixel 2 with much lower price and less powerful hardware. Google is bringing this in order to reach more audience who wanted to try out Google Pixel Android smartphone.

Google Pixel 2B Price in India

On comparison to Pixel 2, Google Pixel 2B will be significantly cheaper and affordable by mass consumers.

Although this is just a report from reliable source by 9to5google but it may change at the time of release which we will update here frequently. I hope you liked this post on upcoming Google Pixel 2 Price and new leaked features. Share this Tech News with your friends on social media. Thank You :)