Honor Note 10 With massive Display and 5000mAh Battery Launched, The Chinese brand honor launched its another flagship smartphone named as Honor Note 10. Sale of this smartphone will be live on 3rd August, currently Honor is taking Pre orders of Honor Note 10 in china. The smartphone comes with massive 6.95-inch display, 5000mAh battery, Dual rear cameras, outstanding selfie shooter, and Kirin 970 SoC etc. The smartphone runs Android 8.1 Oreo-based EMUI 8.2 out of the box with the company’s GPU Turbo technology on board. Talking about the specifications of the smartphone, Honor Note 10 boasts a 6.95-inch Super AMOLED display with Full HD+ resolution and 18.5:9 aspect ratio. The unusual aspect ratio means the device sports a notch on top. The phone comes powered by the HiSilicon Kirin 970 chipset. Further more, the phone also comes with the company’s GPU Turbo technology which is said to boost the GPU performance by 60% and at the same time, it keeps the battery consumption decidedly lower. Honor also introduced a new technology called CPU Turbo with the Note 10, which cleans up the background apps and increases the clock speed of CPU while gaming.

Therewith, the device comes with dual cameras on the rear side. A primary 16 mega pixel shooter is paired with a 24 mega pixel secondary Monochrome sensor. On the front Honor has added a 13MP shooter. The device will be available in various memory, colour & storage options such as  4GB / 6GB up to 128GB. The fingerprint scanner is placed on the back panel below the rear camera, and the device is backed by a enormous 5000mAh battery. Lastly The device supports fast charge. 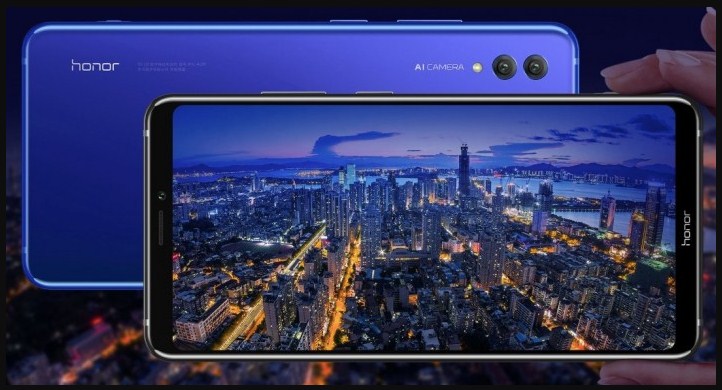 Aforesaid, Honor is known for launching smartphones in different colour options, and the same could continue with the Honor 10. The device launched in Two colour options such as Midnight Black and Phantom Blue. The smartphone comes in various storage variants such as 4GB Ram + 64GB Storage, 6GB Ram + 128GB Storage and 8GB Ram + 128GB Storage. The base variant of the phone is priced at Rs 29,100 (Approx) while the 6GB variant is priced at Rs 33,400 (Approx) and the 8GB variant will be available for purchase at 37,900 (Approx). Earlier, Huawei’ sub-brand Honor launched Honor Play, it is a flagship smartphone that was launched in China a while back with the company’s latest GPU Turbo technology. Amazon India has started teasing the handset’s launch in India and also confirmed that the device would be exclusive to the e-commerce portal. it’s the third smartphone from Honor to be launched with the Kirin 970 chipset and is expected to be priced around Rs 30,000. The device flaunts a 6.3-inch Full HD+ display with a resolution of 1080 x 2340 pixels and 19.5:9 aspect ratio comes with a Kirin 970 chipset, clubbed with 4GB / 6GB of RAM and 64GB of internal storage.

Also, This brand launched a new variant of the Honor 10 in China with 8GB of RAM, dubbed as the Honor 10 GT. The term GT refers to GPU Turbo technology, which the Chinese company launched a few days back, The new variant features 8GB of RAM inside, up from the 6GB RAM we saw on the original Honor 10 smartphone.

Willl Honor launch Honor Note 10 in other countries? let us know in the comments section below.