Hello, everyone we are back with the images of Nokia 1 which are leaked online. Nokia 1 is the first Android phone with Oreo Go Edition. Let us know the full details of the leaked pictures of Nokia 1.

Recently, there were reports that, HMD Global is working on its first Android Go edition smartphone. The phone is called Nokia 1 which will have Android Go.

Back in December, the news of Android Go smartphone Nokia 1 came. Few of the specifications were leaked after that Now some images of the smartphone have come online on Chinese microblogging site Baidu. On this site, we have seen some features and the key design of the upcoming smartphone.

Nokia 1 is the low budget Android smartphone. The phone with Android Go from HMD Global can be launch in this year at MWC. The pictures of the device which are leaked online give us some idea about the device. The two pictures of Nokia 1 has leaked online. From the two, one of the images is showing the device in the case and the other is showing the Smartphone without a case. After seeing the image we can see that the device has a single camera coupled with LED flash on the rear side. Exactly under the camera, the logo of the brand Nokia is there. The images give us hint that the device can come with a plastic built on the outside.

ALSO READ: Micromax And Google Are All Set To Launch $32 Android Go(Oreo Edition) Smartphone In India

If we talk about the design of Nokia 1 then it looks similar to the previous Nokia 2. Even the details of the device have been leaked earlier. It is expected that Nokia 1 can be launched in March 2018 at MWC.

Check out the two pictures of Nokia 1 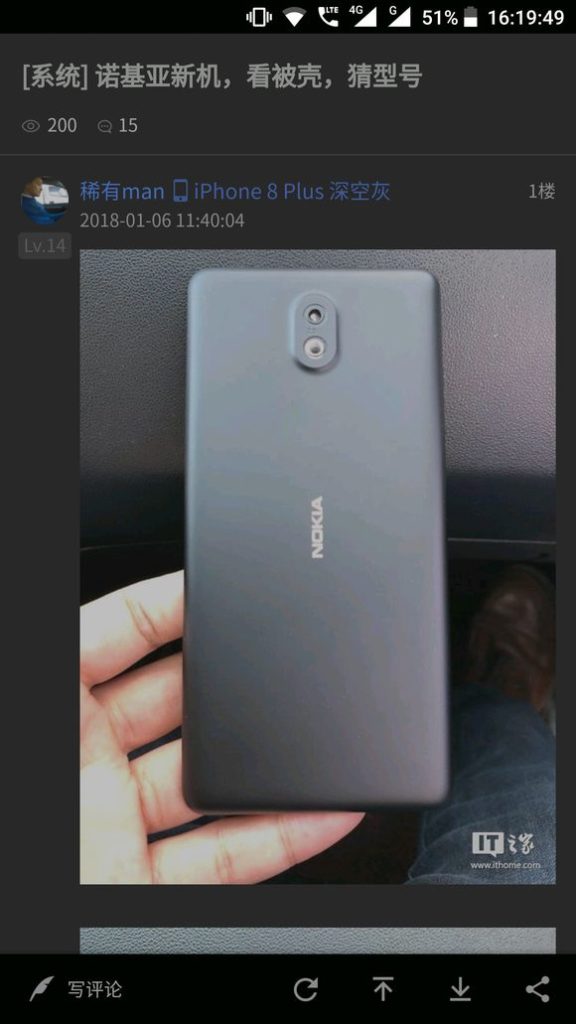 The display of the smartphone is an HD display with a screen resolution of 720 x 1280 pixels. The internal storage of the device is 8GB and it comes with 1GB of RAM. Nokia 1 is powered by Snapdragon 212 processor. The price of the device will be around 5990 Rubles which in Indian Rupees is around Rs. 6700

The leaked pictures and specifications of Nokia 1 gives us hint that the design and features are similar to Nokia 2. These leaked images have a complete similarity to Nokia 2 and also the specifications which are leaked are same as Nokia 2. Also, the price tag is same.

If everything between Nokia 1 & 2 is same then what will be the difference? Will be knowing everything after the launch only. We can say that thought the devices price and features are same but the hardware will be better with good apps from Android Go (edition).

Recently, Google announced about the Android Oreo Go edition at Google I/O 2017. Thie new Oreo edition is especially brought for cheap devices which comes with 512MB or 1GB of RAM. The New Oreo Go Edition wants to bring all the Android updates to the masses. This will be soon available in the Android Oreo 8.1 release.

Nokia 1 is the first phone with Android Oreo Go (edition). It is especially rearranged for the low-level handsets. The project wants a good presentation with built-in data management qualities and benefits.

The phones which will have Android Go Phones will have the better software and it will help the low-end phones to run better hardware. The Android Go edition is also brought for many Google apps like Google Go, Google Assistant Go, YouTube Go, Google Maps Go, Gmail Go, Gboard, Google Play, Chrome.

The Android Oreo Go edition devices will come in the market in early 2018 and it will be starting with Nokia 1 then followed by few of the domestic vendors.

So guys what do you think after seeing the leaked pictures of Nokia 1 the first Android Go edition phone? Share your views with us by commenting below.