Home
/
Paytm
/
Paytm Has Launched 'Inbox', a Full-Fledged Chat Platform! Allows You To Chat With People

Hello, readers, we are back with a new article. Paytm has launched a new feature "Inbox", a full-fledged chat platform. Let us know everything about this app in details. Earlier, we told you about the new Whatsapp feature called "‘Delete for Everyone". Now, Paytm has launched its new feature "Inbox". From past few months Paytm was working on a messaging feature. Now, finally, on 3rd November, the company has launched the new messaging features as Paytm Inbox.

Earlier in August, there was a report about "Paytm Inbox". This new Paytm feature is full messaging platform and it allows the user to chat, share pictures, videos and you can even send and receive money via Paytm Wallet. Paytm Inbox is similar to Whatsapp.

A senior vice President of Paytm, Deepak Abbot, said, We have realized that besides making payments, our users and merchants also like to communicate with each other. There is a need of social messaging, commerce and payments seamlessly blending into one another."

He further added, "One step for us towards meeting this consumer need is 'Paytm Inbox' where you can chat with friends/ merchants and send/ receive money effortlessly and securely."

This new update of Paytm is available on Android and is soon coming to iOS. The Inbox feature is available in the main Paytm app at the bottom of the app just beside the Bank feature. After Tapping on the feature you can start chatting with your friends.

In the messages option, you have a button to start a chat with another Paytm user who is using the app in your contact. In the chat menu, you can send photos and can also send your live location. Like WhatsApp, Paytm Inbox also has the option to recall a message.

The Paytm Inbox feature is quite interesting but it has one disappointing UI element. The text box is just a single line. Which means, if you type a bit long text of more than six words, you can't see what you wrote in the beginning of the sentence.  Because of this, it is hard to edit your message before sending it to your friend.

ALSO READ: Here Is Everything About Ola Prime Play!! Make Your Ride Entertaining

In Paytm Inbox, at the bottom row, there are icons, camera, gallery, send and receive money and a location icon. However, if you message to someone who has an old version of the app then they won't get your text or money request.

According to Paytm, Inbox will make payments easier, "as everyone from individuals to local retail stores to home-based entrepreneurs can now interact and initiate payments on-the-go."

The company in a statement, said, "the messaging platform is encrypted end-to-end, and users can initiate private conversations and create group chats. They can also send photos and videos instantly, share live location, capture and share moments with the built-in camera. There is also a feature allowing users to recall their messages using 'Delete for All'." 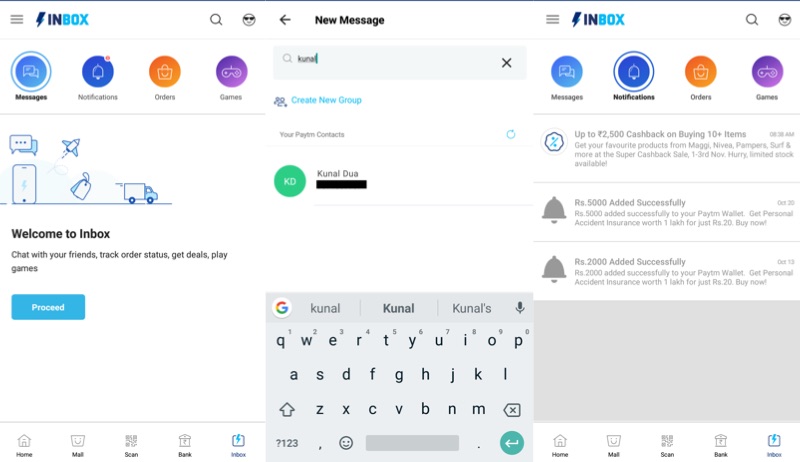 Paytm Inbox also has "Notifications" where you will see cashback offers which will be available.It also has “Orders” to let you view your order and transaction updates on the Paytm Mall, and “Games”.

Well, Whatsapp is the most popular app with at least 200 million active users. Paytm is also very popular in India. It grew up too much after the demonetization happened in November 2016. Now, Paytm has more than 200 million wallets. Whatsapp and Paytm are getting same but they are coming to the same place with different directions. It will be interesting to see which one will be more used after WhatsApp payment feature will come.

Paytm in a blog post said, "We are excited to launch Paytm Inbox today, a new offering on our app with a fast and simple messaging service that will let you chat with your friends and family, and send/request money at the same time. You can even chat with your friendly neighborhood shopkeeper and order stuff easily and send them money instantly on delivery”.