Nokia 7 Plus by HMD Global has been leaked by ithome.com and later posted on Gizchina website where they have revealed the slideshows of this smartphone for MWC (Mobile World Congress) 2018 event. Nokia 7 Plus specifications tell that it will be the first 18:9 display ratio smartphone by HMD Global for Nokia.

Leaked presentation slides of Nokia 7 Plus is quite reliable hence many of the tech news industries are covering it like it was featured on Telecomtalk. 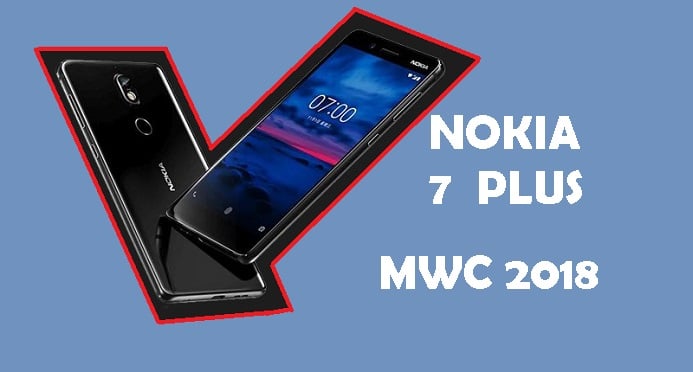 On the Chinese Baidu search engine, few presentation slides were leaked recently which highlights some of the key specs for Nokia 7 Plus Android smartphone.

The display screen on Nokia 7 Plus will be of 18:9 aspect ratio which is also becoming industry standard and needs as pointed out by MKBHD, a famous tech reviewer.

Leaks from Baidu and Geekbench show that Nokia 7 plus will be packed with Qualcomm Snapdragon 660 chipset and powered by the latest Android Oreo 8.0.

Nokia 7 Plus has a big display size of 6 Inch which is the Full HD+ screen.having a resolution screen of 2160 x 1080 pixels.

Battery capacity is 3450 mAh and it supports fast charging.

The body of Nokia 7 Plus is made of metal with ceramic coating on the edges.

It has a fingerprint sensor on the back side due to the coverage of huge aspect ratio in the front.

Camera point on Nokia 7 Plus is on fleak, with the rear end having two camera setup containing 12MP and 13MP sensors.

The secondary camera on rear end has a telephoto lens and also captures portrait photo.

The front camera is packed with a 16MP selfie shooter with f/2.0 aperture and Nokia 7 Plus mobile supports Bothie feature which allows you to utilize both front and rear camera at once.

Out of the box, you will get Android Oreo 8.0 but soon you will receive an update on Oreo 8.1 version.

Some rumors tell that it will come with 4 GB of RAM variant having 64 GB of internal storage but also expected to be launched in 6 GB variant. Not only that, it will have a microSD card support to expand storage memory.

The smartphone is expected to come with 3.5 mm headphone jack and USB Type-C port.

Nokia 7 Plus Price in India:

Although it is not yet sure it will ever come in Indian market but according to the source which is GizmoChina, it's rumored to be priced at 410 Euro that is equal to $508 which is equal to 32500 Indian Rupees.

Nokia 7 Plus launch date would be in between MWC 2018 which is going to be held from 26th February to 1st March.

Here is a stunning video on Nokia 7 Plus render done by TargetYoutube website.